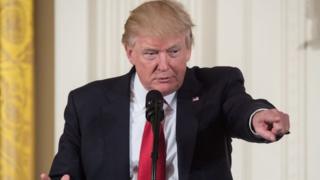 No one is laughing now.

The House Freedom Caucus, the collection of libertarian-leaning conservatives who helped sink the Trump-backed American Health Care Act last week, appears to be as much of a political enemy for the president as the Democratic Party.

“The Freedom Caucus will hurt the entire Republican agenda if they don’t get on the team, & fast,” Mr Trump tweeted on Thursday morning. “We must fight them, & Dems, in 2018!”

The tweet was the latest, most pointed, shot at the Freedom Caucus since the healthcare bill collapsed last Friday. In his initial remarks that afternoon, after the bill was unceremoniously pulled from consideration in the midst of being debated in the House, Mr Trump placed the blame squarely on the Democrats.

“We had no votes from the Democrats,” the president lamented. “They weren’t going to give us a single vote, so it’s a very difficult thing to do.”

On Sunday the president tweeted that the Freedom Caucus, along with several grass-roots conservative groups, had “saved” Obamacare and the women’s health group Planned Parenthood, whose clinics provide abortion services.

The next day he wrote the Freedom Caucus “was able to snatch defeat from the jaws of victory”.

Now it appears the president is preparing for all-out war against the intransigent congressmen – and it’s a fight they seem willing to join. Shortly after Mr Trump fired his Thursday morning broadside, Justin Amash, a prominent member of the Freedom Caucus, offered his reply.