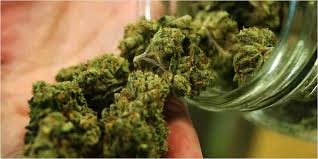 Senate Majority Leader Charles Schumer (D-N.Y.) on Thursday announced on the floor that he will use his clout to make legislation ending the federal prohibition on marijuana a top priority.

Marijuana is currently listed as a Schedule 1 banned drug under the Controlled Substances Act, and an estimated 40,000 Americans are in jail because of cannabis-related offenses, according to Forbes.

Schumer on Thursday said he will throw his political weight behind legalizing marijuana, which was declared illegal on a nationwide basis in 1937.

“I am the first majority leader to say it’s time to end the federal prohibition on marijuana and as majority leader, I’m going to push this issue forward and make it a priority for the Senate,” Schumer said in his morning remarks.

Schumer doubled down on remarks a day earlier at a press conference introducing a draft of the Cannabis Administration and Opportunity Act, which would lift the federal prohibition on cannabis and allow state-compliant cannabis businesses to have access to financial services such as bank accounts and loans.