The House Select Committee investigating the January 6 attacks will hold its latest and possibly final public hearing of evidence on Wednesday. The panel, who last held a live presentation in July on the events that led up to the Capitol riot, is expected to draw up its final report following Wednesday’s hearing, with the […]

Republican Rep. Louie Gohmert of Texas presented an honorary American flag recently flown above the US Capitol to a convicted January 6 rioter after she was released from prison Friday. Gohmert, a Trump ally who has previously promoted debunked conspiracies about the January 6, 2021, insurrection, met Dr. Simone Gold upon her release from federal […]

Stephen Colbert addressed the recent arrests of his crew and production members, who were caught and charged with being in an unauthorized area of a U.S. Capitol building last week. During Monday night’s “Late Show,” Colbert downplayed the arrests as a “very professional” interaction between his staff and “cautious” Capitol Police officers. The host opened […]

Former President Donald Trump on Saturday night held a Save America rally in Texas, where he took shots at several Democrats and teased a 2024 presidential candidacy by saying he will give “pardons” to his supporters who stormed the Capitol on Jan. 6 last year if he runs and wins in 2024. Trump made the […]

The decision on whether to prosecute former White House strategist Stephen Bannon for defying a congressional subpoena now rests solely with the Justice Department, which must wrestle with filing criminal charges against an ally of President Biden’s top political opponent while striving to assert its independence. The House voted 229-202, including the backing of nine […]

A Florida man who was seen carrying a large red “Trump 2020” flag on the floor of the U.S. Senate during the Capitol riot received eight months in prison Monday in the first felony sentence from the Jan. 6 attack. Paul Allard Hodgkins, 38, of Tampa, was arrested Feb. 16 after the FBI received a […]

Senate Republicans on Friday blocked legislation to form a commission to probe the Jan. 6 attack on the Capitol. Senators voted 54-35 on the House-passed bill, falling short of the 10 GOP votes needed to get it over an initial hurdle and marking the first successful filibuster by Republicans in the 117th Congress. GOP Sens. […]

For Kevin McCarthy, the race to move beyond Jan. 6 is personal. The House Republican leader not only has his eyes set on the Speakership after next year’s midterms, he was also the only lawmaker to speak directly to President Trump in the midst of the violent attack on the Capitol. Those seemingly unrelated facts […] 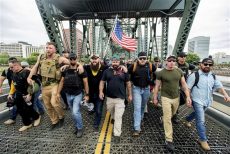 Federal prosecutors Friday night announced the first conspiracy charges against members of the Proud Boys over the group’s role in the deadly Jan. 6 riot in the Capitol. Prosecutors said in a news release that two members of the far-right “Western chauvinist” group conspired to obstruct law enforcement officers’ efforts to protect the Capitol from […]

A retired firefighter from Pennsylvania was arrested Thursday morning for allegedly throwing a fire extinguisher that hit three police officers at the pro-Trump riot at the U.S. Capitol as captured on video, U.S. officials said. Robert Sanford of Chester, Pa., faces three federal felony charges including assaulting a police officer after he was allegedly identified […]