Former President Donald Trump is blaming Democrats, including former first lady Michelle Obama, for pressuring Facebook to ban him from the platform, thereby making it harder for him to run for president in 2024. Trump filed a class-action lawsuit against Facebook on Wednesday, alleging that the platform violated his and other users’ First Amendment rights […]

Former President Obama during ABC’s Juneteenth television special said that ensuring that democracy “continues to work effectively” as the United States becomes more diverse is one of the main things that “keeps him up at night.” During a special episode of ABC’s documentary series “Soul of a Nation” titled, “Juneteenth: Together We Triumph,” the former […]

Former President Obama on Tuesday shared a message on Twitter encouraging Americans to get the coronavirus vaccine while addressing misinformation that has circulated about vaccinations. “There is a lot of disinformation out there, but here’s the truth: You should get a COVID vaccine as soon as it’s available to you. It could save your life—or […] 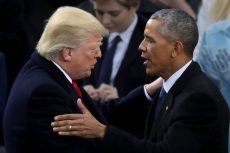 President Trump has ended former President Obama’s 12-year run as the most admired man in America, edging out his predecessor in the annual Gallup survey released Tuesday. Eighteen percent of the survey’s respondents named Trump as their most admired man, compared to 15 percent who named Obama and 6 percent who named President-elect Joe Biden. […]

Former President Obama on Sunday called on voters to support Democratic nominee Joe Biden, sharing a tweet from Biden posted on the same day in 2019 warning that President Trump was not prepared for a pandemic. In the 2019 tweet, which came far before the coronavirus pandemic was on Americans’ radar, Biden wrote: “We are […]

Joe Biden says former President Barack Obama will be hitting the campaign trail on the current Democratic presidential nominee’s behalf. And Biden, who served for eight years as vice president under Obama, emphasized that his former boss is “doing enough for our campaign” and that Obama’s “doing well.” Biden made his comments as he briefly […]

The House and Senate have struck a deal that could send to President Trump’s desk this summer a bill that slaps new sanctions on Russia. In addition to the new sanctions on Russia for its interference in the U.S. 2016 election and its military aggression in Ukraine and Syria, the bill also gives Congress the […]

President Donald Trump said this morning that his predecessor Barack Obama “colluded or obstructed” in regards to Russian interference in the U.S. election. “The reason that President Obama did NOTHING about Russia after being notified by the CIA of meddling is that he expected Clinton would win and did not want to ‘rock the boat.’ […] 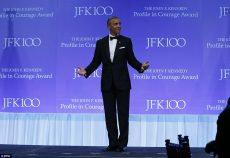 http://video.dailymail.co.uk/video/mol/2017/05/08/600183790975862960/1024x576_MP4_600183790975862960.mp4 Former president Barack Obama has vigorously defended Obamacare as he called on members of Congress to show courage in the debate over the future of health care in America. Obama was careful not to mention Donald Trump by name in Boston on Sunday night as he referenced the current administration’s efforts to dismantle much […]

President Trump’s election appears to be negatively affecting gun sales in the U.S. and the bubble appears to be bursting despite a staunch advocate for gun rights in the White House and Republicans ruling Congress. “President Obama was the best gun salesman the world has ever seen,” Karl Sorken, a production manager at Battle Rifle […]