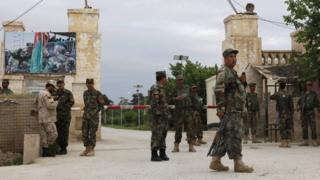 More than 100 Afghan soldiers were killed or wounded in a Taliban attack on an army base on Friday, the defence ministry has confirmed.

Fighting lasted for several hours near the city of Mazar-e Sharif in northern Balkh province.

Insurgents targeted those leaving Friday prayers at the base’s mosque and others in a canteen, the army said.

The Taliban said in a statement they had carried out the attack, using suicide bombers to breach defences.

Earlier estimates put the death toll as high as 134, but a statement from the defence ministry on Saturday gave the figure of more than 100 killed or injured.

It is one of the deadliest tolls in a Taliban attack on the Afghan army.

At least 10 Taliban militants were also killed in the fighting and one attacker was detained.

The Afghan government has declared Sunday a day of national mourning.