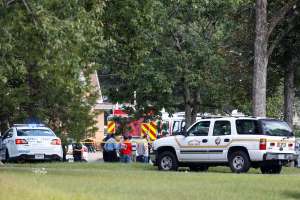 A man accused of killing a woman in a shooting rampage at a Tennessee church this week might have acted to avenge the murders of nine black people in a South Carolina church two years ago, the Washington Post reported on Friday.

A note in the car of Emanuel Kidega Samson, 25, indicated a possible plot spurred by the fatal 2015 shootings at Emanuel AME church, a historic African-American house of worship in Charleston, the newspaper said, citing unnamed people familiar with the investigation.

Samson, who police say was wearing a mask, is accused of killing a woman in the parking lot of Burnette Chapel Church of Christ in Nashville on Sunday. He shot and wounded six worshipers in the building, before shooting himself in a scuffle with an usher, police have said.