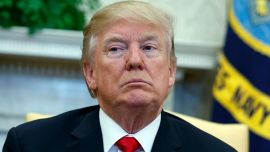 Among his first statements following Friday’s release of the now-declassified memo by Republicans in control of the House Intelligence Committee, Trump suggested Saturday the revelations in the document prove the ongoing probe is a “witch hunt.”

“This memo totally vindicates ‘Trump’ in probe,” Trump tweeted Saturday. “But the Russian Witch Hunt goes on and on. Their [sic] was no Collusion and there was no Obstruction (the word now used because, after one year of looking endlessly and finding NOTHING, collusion is dead). This is an American disgrace!”

The four-page memo, written by House Intelligence Committee Chairman Devin Nunes, R-Calif., alleges intelligence abuse by the Department of Justice and the FBI during the 2016 presidential campaign. Particularly, it alleges that the two agencies requested a surveillance warrant using a disputed anti-Trump dossier funded by Democrats.