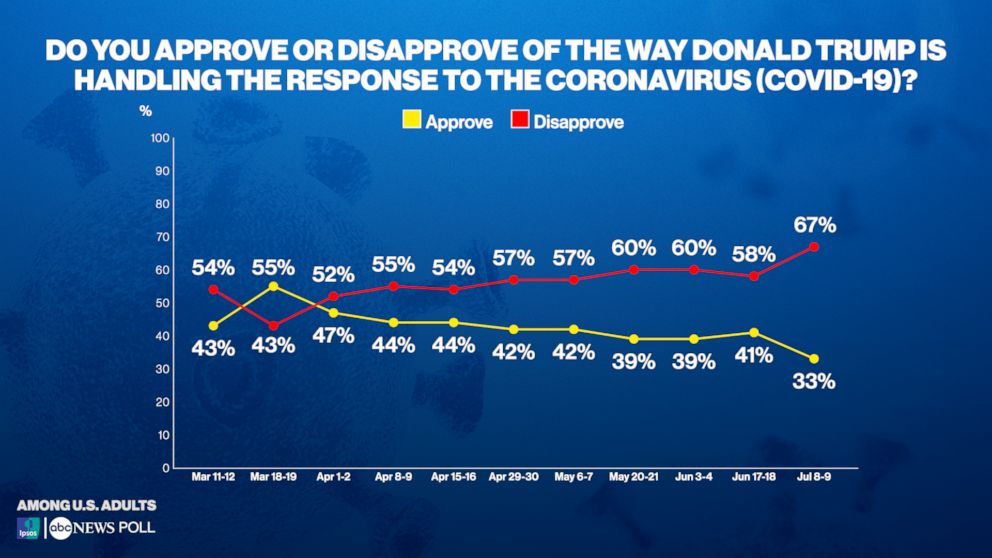 President Donald Trump is facing broad disapproval for his management of the two major crises gripping the nation, with two-thirds of Americans giving him low marks for both his response to the coronavirus pandemic and his handling of race relations, according to a new ABC News/Ipsos poll released Friday.

Evaluation of Trump’s oversight of the COVID-19 crisis reached a new low since ABC News/Ipsos began surveying on the coronavirus in March, with 67% disapproving of his efforts. One-third of the country approves of the president’s oversight of the pandemic.

Over nearly four months of polling, Trump’s approval has mostly held steady, except for one week in mid-March, when it spiked above 50%. In the last month, Trump’s approval dipped to a range between the high 30s and low 40s, as the U.S. saw a resurgence of coronavirus cases, particularly across the south and west.

In the newest poll, which was conducted by Ipsos in partnership with ABC News using Ipsos’ Knowledge Panel, Trump’s approval rating on his job dealing with the coronavirus dropped another rung, driven by plunging support among independents and even waning support among Republicans. Democrats have always been highly skeptical.