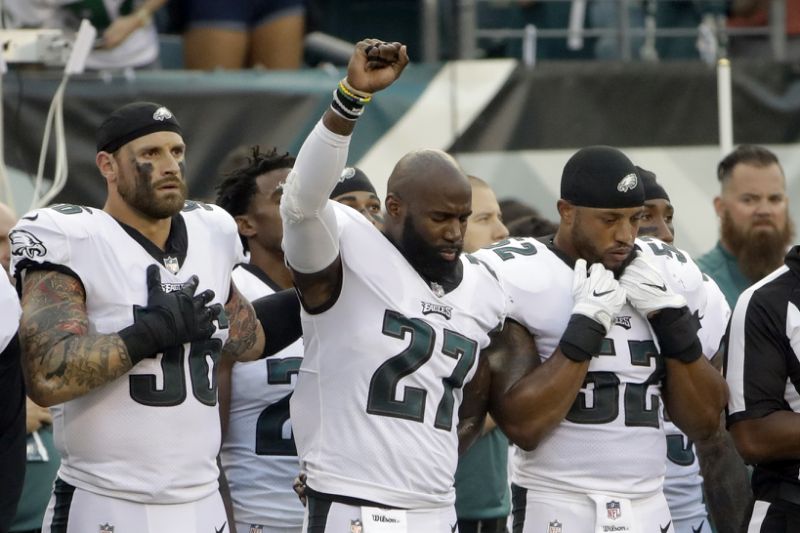 The Philadelphia Eagles’ Malcolm Jenkins has been offering his own statement during the pregame playing of the national anthem, raising a fist to protest racial injustice. Teammate Chris Long joined Jenkins on Thursday night, placing a hand on Jenkins’ shoulder. It was a small gesture in the moment, but it could have significant impact on the ongoing anthem debate.

Why? Very simple. Jenkins, like Colin Kaepernick and most — if not all — the anthem protesters in the NFL to date, is black. Long is white.

“I think it’s a good time for people that look like me to be here for people that are fighting for equality,” Long said after the game. A graduate of the University of Virginia who considers Charlottesville his home, Long spoke out in no uncertain terms about President Trump’s “both sides” equivocation in the wake of last weekend’s fatal riots.

“It’s been a hard week for everybody,” he continued. “I think it’s not just a hard week for someone being from Charlottesville. It’s a tough week for America. I’ve heard a lot of people say, ‘You need white athletes to get involved in the anthem protest.’ I’ve said before that I’ll never kneel for an anthem because the flag means something different to everybody in this country, but I support my peers.”

Long then directly addressed the critics he knew would be rising out of the comment sections and sports-radio call-ins of the world: “If you don’t see why you need allies for people that are fighting for equality right now, I don’t think you’ll ever see it,” he said. “My thing is, Malcolm’s a leader and I’m here to show support as a white athlete.”