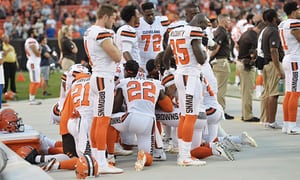 More than a dozen Cleveland Browns players staged the largest national anthem protest yet, and were joined by white players for what’s believed to be the first time, before a preseason game on Monday against the New York Giants.

The group, which included veterans, rookies, starters and backups, gathered in front of some water coolers and behind their teammates who stood on the sideline shortly before the Browns hosted the New York Giants in a preseason game.

“There’s a lot of racial and social injustices in the world that are going on right now,” rookie safety Jabrill Peppers told ESPN. “We just decided to take a knee and pray for the people who have been affected and just pray for the world in general.”

DeValve, who is white, is believed to be the first white player to take a knee during the Star-Spangled Banner, joining a movement kicked off last season by quarterback Colin Kaepernick, who is currently out of the NFL. Last week, Seattle Seahawks defensive end Michael Bennett said the protest would be more effective if white players joined their black team-mates.