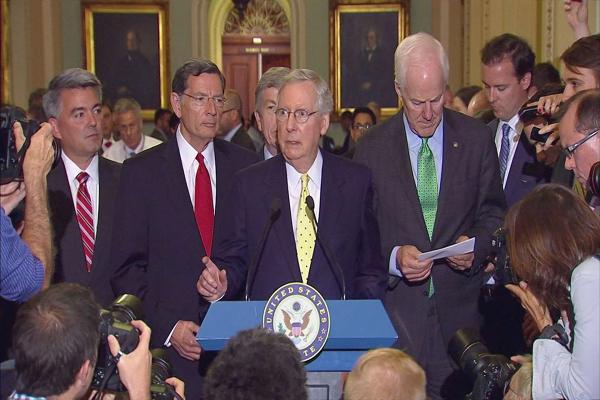 Senate Majority Leader Mitch McConnell on Monday insisted the U.S. government will raise the debt ceiling and avoid defaulting on its debt.

“There is zero chance — no chance — we won’t raise the debt ceiling. No chance,” McConnell said at an event in Kentucky with Treasury Secretary Steven Mnuchin. “America’s not going to default. And we’ll get the job done in conjunction with the secretary of the Treasury.”

Mnuchin has called for Congress to pass a bill to increase the borrowing limit by the end of September. By then, the Treasury will have exhausted its so-called extraordinary measures to continue its borrowing authority and risks defaulting on its debt.

The Treasury secretary has called for a “clean” debt-ceiling increase, meaning lawmakers would not attach spending cuts or other provisions to it. Some conservatives, particularly in the House, have previously tried to pair measures to raise the debt ceiling with spending cuts.

On Monday, Mnuchin said the debt ceiling was his top priority when lawmakers return from recess next month.

“We’re going to get the debt ceiling passed. I think that everybody understands this is not a Republican issue, this is not a Democrat issue,” Mnuchin said. “We need to be able to pay our debts. … This is about having a clean debt ceiling so that we can maintain the best credit, the reserve currency and be focused on what we should be focusing on … so many other really important issues for the economy.”