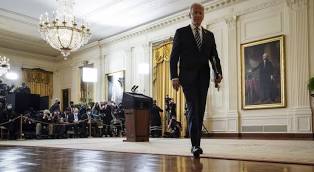 President Biden will give his first State of the Union address Tuesday night, marking the most consequential speech of his lifetime as U.S. inflation soars and Eastern Europe devolves into war.

While State of the Union speeches tend to concentrate on domestic issues, Russian President Vladimir Putin’s decision to launch a full-fledged invasion of Ukraine despite Biden’s repeated threats of economic sanctions has brought the U.S. president’s foreign policy agenda into central focus.

During his speech Tuesday, the president is expected to champion the sanctions and his own efforts in building a “global coalition to fight against the autocracy” of the Kremlin, White House Press Secretary Jen Psaki said Sunday.