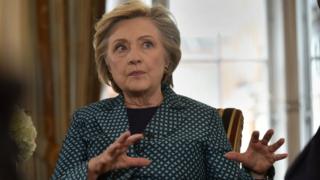 US President Donald Trump has seized on reports that Hillary Clinton’s team bankrolled a sleazy dossier of allegations linking him to Russia.

Unfounded claims that Mr Trump had been filmed with prostitutes in a Moscow hotel surfaced in the closing stretch of last year’s White House race.

“The victim here is the President,” Mr Trump tweeted on Wednesday.

According to US media reports, Perkins Coie, a law firm representing the Clinton campaign and DNC, hired intelligence firm Fusion GPS in April 2016.

Fusion GPS, based in Washington DC, was paid to dig up dirt on Mr Trump, who was then Mrs Clinton’s rival for the presidency.