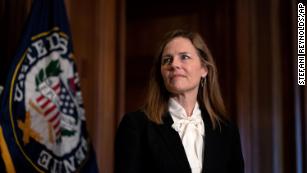 WASHINGTON — The Senate Judiciary Committee advanced the nomination Thursday of Amy Coney Barrett to serve as a Supreme Court justice in a 12-0 vote, with Democrats boycotting the day’s proceeding.

“The nomination of Amy Coney Barrett is the most illegitimate process I have ever witnessed in the Senate. And her potential confirmation will have dire, dire consequences for the Senate, for the Supreme Court and our entire country for generations to come,” Senate Minority Leader Chuck Schumer, D-N.Y., warned during a press conference following the vote outside the Capitol alongside Democrats on the committee.

Republicans disregarded committee rules, Schumer said, which say that two members of the minority must be present in order to vote anyone out of committee.

Schumer said that Chairman Lindsey Graham, R-S.C, “steamrolled over them, just like the Republican majority has steamrolled over principle, fairness, honesty, truth and decency in their rush to confirm a justice.”