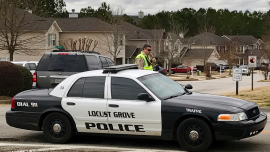 A Georgia police officer was killed Friday and two sheriff’s deputies were injured while serving an arrest warrant, police said.

The incident occurred after two Henry County Sheriff’s deputies arrived at a residence, Sheriff Keith McBrayer said, according to Fox 5 Atlanta. Law enforcement reportedly called for backup after speaking to the suspect, at which point a Locust Grove officer arrived, and then an altercation occurred.

The slain officer died of a gunshot wound, the outlet said. The shooter was also reportedly killed.

This is a developing story; please check back for updates.