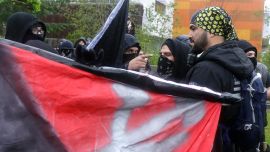 CAMDEN, N.J. –  A New Jersey police officer shot in the thigh at point-blank range during a struggle with a suspect this week left the hospital Saturday, supported by dozens of colleagues in law enforcement.

Patrick O’Hanlon gave a thumbs up to roughly 50 officers who stood at attention as he came out of Cooper University Hospital in a wheelchair. But the officer did not make any comments before he and his family members got into the Camden County deputy chief’s vehicle and left the facility.

O’Hanlon, 21, who joined the police force less than a year ago, will continue his recuperation at home.

The shooting occurred Wednesday night in Camden when the Camden County officer approached three people who authorities say were acting suspiciously. They say 19-year-old Delronn Mahan ran away but was soon captured by O’Hanlon.