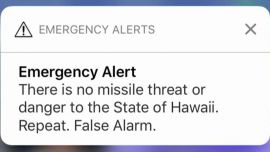 Hawaii emergency officials confirmed Saturday that an alert warning that a ballistic missile was inbound to the island was a mistake.

Earlier Saturday, Hawaiian citizens reported receiving an emergency alert on their phone that stated: “BALLISTIC MISSILE THREAT INBOUND TO HAWAII. SEEK IMMEDIATE SHELTER. THIS IS NOT A DRILL.”