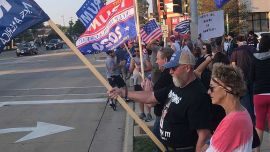 Ohio police are looking for a man who opened fire during a pro-Trump car-parade Saturday morning, shooting through the window of a victim’s vehicle.

Police in Hillard, OH, a suburb in the capital city of Columbus, are investigating the shooting which reportedly occurred shortly before 11 a.m. Saturday morning.

The shooter is believed to have been a participant of the parade, but has not yet been apprehended.

Hillard Police’s Public Information Officer Andrea Litchfield, said that officers responded to a call of shots fired on the I-270 around 10:40 a.m., but they have not confirmed whether the rally and the shooting were related.

“That is something we are absolutely looking into,” she told Fox News Saturday.