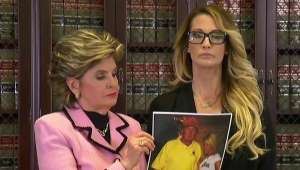 Jessica Drake said in a press conference with attorney Gloria Allred that after meeting Trump at a golf tournament in Lake Tahoe in 2006, he offered her $10,000 to come to his room, which she said she declined.

Drake said that the two first met while she was working at a booth at the golf course. She said she and Trump took a walk around the course and he asked her for her number, which she gave him. Trump later invited her to his penthouse suite, she said, but she didn’t feel comfortable going alone so she went with two friends.

“When we entered the room he grabbed each of us tightly in a hug and kissed each of us on the lips without asking for permission,” Drake said at the press conference.