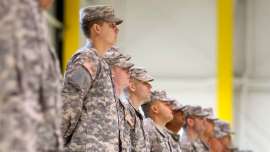 After giving thousands of California soldiers bonuses for re-enlisting in the National Guard, the Pentagon is now asking soldiers to return the money they were paid almost 10 years ago, according to a new report.

The payments came during the wars in Iraq and Afghanistan when the Pentagon feared a shortfall of troops, according to a Los Angeles Times investigation published Saturday.

Recently completed audits revealed that the California National Guard was overpaying bonuses due to a lack of oversight at the time, the investigation found.