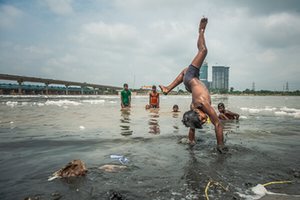 A week before Russia’s Daldykan river was turned red by a leak from a metals plant, the UN issued a warning as chilling as it was overlooked: 323 million people are at risk from life-threatening diseases caused by the pollution of rivers and lakes.

Cholera, typhoid and other deadly pathogens are increasing in more than half of the rivers in Africa, Asia and Latin America, according to a UN environment programme (Unep) report. Salinity levels have also risen in nearly a third of waterways.

Asia has been worst hit, with up to 50% of all rivers now affected by severe pathogen pollution caused by a cocktail of untreated waste water disposal, agricultural pesticides run-off and industrial pollution.

In a telling footnote to the Russian Norilsk disaster, Nasa released satellite images on 15 September showing that far from being a one-off, the Daldykan river had turned red on multiple occasions in the past 20 years.

“There is often no incentive for companies and players high up in a river basin not to pollute,” says Paul Reig, an associate for the World Resources Institute. “The impacts are often not noticed until they are carried to water users downstream, especially when there are no regulatory requirements and no implementation or monitoring of water quality downstream to track it back.”