A British man who summited Mount Everest wrote that he feared the dangers of overcrowding on the world’s highest peak before dying on his descent. Robin Haynes Fisher, 44, is among the growing number of people who have died trying to conquer the Himalayan summit this climbing season, putting a spotlight on the crowds of […]

A rescue is underway to extract a group of men who became stuck in a cave in Virginia after rain made it difficult to get out, officials said Sunday. A group of six initially planned to spend the weekend inside the cave in Cleveland, Virginia, until it began raining late Saturday night, Jess Powers, coordinator […]

Search and rescue teams in Alabama are using dogs and heat-detecting drones to search for victims of the deadly tornado that tore through the southeastern part of the state, as new drone video and photos show the scale of the devastation. Lee County Sheriff Jay Jones said Tuesday at a news conference at least 23 people […]

The Tennessee Valley Authority announced Thursday that it would close two coal plants, including one that buys its fuel from one of Donald Trump’s campaign contributors, despite public pressure from the president to keep it open. In a 5-2 vote, the public utility’s board of directors chose to shutter Kentucky’s Paradise Fossil plant in 2020 […]

A remote Russian archipelago declared a state of emergency on Saturday after an “invasion” of dozens of polar bears, that country’s state news agency said. A local official, Alexander Minayev, said that 52 polar bears were spotted between December and February near Belushya Guba, a settlement on the Novaya Zemlya archipelago in the Arctic Ocean, […]

A harsh and deadly winter blast gripping the Midwest and parts of the Northeast sent temperatures plunging to record lows Wednesday — creating brutal conditions that canceled flights, shut down the mail service, closed schools and caused traffic pileups. The National Weather Service warned that the deep freeze, already responsible for as many as eight […]

When Americans die, most are buried or cremated. Washington could soon become the first state to allow another option: human composting. The novel approach, known as “recomposition,” involves placing bodies in a vessel and hastening their decomposition into a nutrient-dense soil that can then be returned to families. The aim is a less expensive way […]

A 7.0 magnitude earthquake rocked the state of Alaska on Friday morning, churning up roads and sending office workers running to the streets in scenes locals described as pure “anarchy.” The U.S. Geological Survey said the earthquake was centered about five miles north of Anchorage, Alaska’s largest city. Republican Rep. Donald Young said at a […] 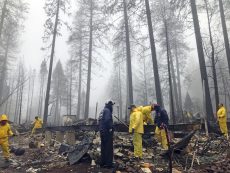 After days of heavy rain, a brightening forecast is allowing search and recovery crews to move faster in Paradise, California; Jeff Paul reports. The Camp Fire that has burned across more than 150,000 acres in California and become the deadliest blaze in state history has finally been contained, officials said Sunday. California Fire officials said […]

Hundreds of people remain missing in the wake of a pair of deadly wildfires that have been burning across both ends of California. The two monstrous blazes, which both ignited earlier this month, have claimed at least 84 lives while laying waste to a total area of nearly 400 square miles, according to the California […]