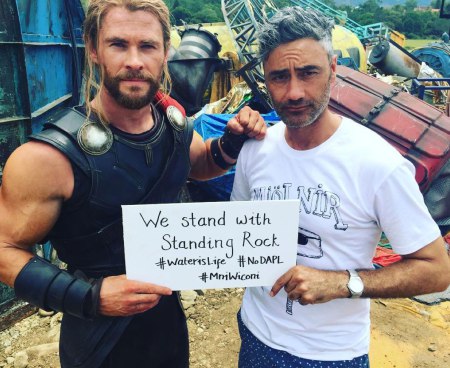 The Avengers stars are on a mission to get President Barack Obama‘s attention in support of protestors aiming to halt the Dakota Access Pipeline.

Protestors say the 1,172-mile conduit that is planned to cross the Missouri River would put their community’s sole water source at risk and destroy sacred Native American sites.

Among those joining the protesters in solidarity are actors Mark Ruffalo, Samuel L. Jackson, Chris Hemsworth and Chris Evans. In the past few weeks, all four Avengers stars took to social media to share their support — and encourage President Obama to join forces with them.

“Take a stand for our brothers and sisters in #StandingRock! Join me in telling @barackobama to just say #NoDAPL. Period. Sign the petition and #StandWithStandingRock at the link in my bio,” Ruffalo, also known as the Hulk in the Marvel films, said in a video bringing attention to the cause.