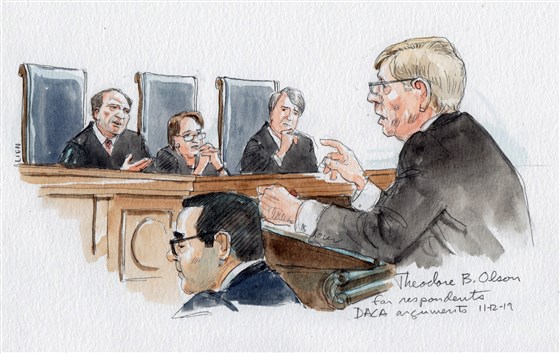 WASHINGTON — A bare majority of the U.S. Supreme Court appeared likely Tuesday to let the Trump administration follow through on its plan to shut down DACA, the federal program that has allowed nearly 800,000 young people, known as “dreamers,” to avoid deportation and remain in the U.S.

With hundreds of DACA supporters rallying outside — so many that police shut down the street in front of the Supreme Court — the justices heard nearly an hour and a half of oral arguments. Based on their questions, it appeared that the court’s five conservatives were inclined to rule that the Department of Homeland Security acted properly when it ordered the program ended in 2017 and that the federal courts cannot second-guess that decision.

While Justices Clarence Thomas, Samuel Alito, Neil Gorsuch and Brett Kavanaugh appeared likely to say DACA was properly shut down, Chief Justice John Roberts did not seem to be as strongly convinced. Roberts may be the deciding vote, just as he was last term when the court blocked the Trump administration from adding a citizenship question to the 2020 census form. He concluded in that case that the government had not given an adequate explanation for its proposed action.