Rudy Giuliani, who served as Former President Trump’s personal attorney, said during a deposition in mid-August that he “didn’t have the time” to look into whether reports of election fraud were credible, CNN, which obtained deposition tapes, reported Friday. Giuliani is being sued by Dominion Voting Systems after he and other defendants connected to the […]

The Appellate Division of the Supreme Court of New York ruled Thursday that they are temporarily suspending former New York City Mayor Rudy Giuliani from the practice of law based on a finding that he gave false statements to courts and others while representing former President Donald Trump. The disciplinary proceedings were the result of […]

Former New York City Mayor Rudy Giuliani lamented a series of foreign policy decisions by President Biden while accusing the president of “caving into Iran” on its nuclear program. During an interview with John Catsimatidis on his radio show on WABC 770 AM, Giuliani blasted the Biden administration for lifting sanctions on Iranian companies as […]

The FBI’s search of Rudy Giuliani’s office this week signals that federal law enforcement is significantly ramping up its investigation into former President Trump’s ally and onetime legal adviser. Little is known about the scope of the investigation, but reporting suggests that the focus could be on Giuliani’s work on behalf of foreign clients, including […]

WASHINGTON — Rudy Giuliani was given a so-called “defensive“ briefing by the FBI in 2019 in which agents warned him he was being targeted by a Russian intelligence influence operation as he sought to gather opposition research on the Biden family, according to a source familiar with the matter. The Washington Post first reported that […]

The top federal prosecutor in Washington, D.C., on Thursday pointedly did not rule out charging President Donald Trump in connection with inciting a riot after his supporters invaded the U.S. Capitol complex a day earlier. Acting U.S. Attorney Michael Sherwin said the Department of Justice will consider lodging criminal charges against anyone who played a […] 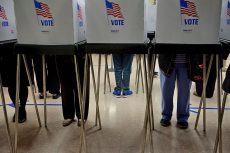 Sidney Powell, the lawyer recently distanced from the Trump campaign, on Wednesday filed typo-filled lawsuits in both Michigan and Georgia alleging election fraud. The suits alleged problems linked to voting machines, mail-in ballots and former Venezuelan President Hugo Chávez, according to Bloomberg. Powell repeatedly made the accusations without providing evidence while she was a member […]

President Trump’s attorney Rudy Giuliani on Sunday insisted that the presidential election would be “overturned,” claiming he had “evidence” that “corrupt machines” had deleted millions of votes for Trump — but couldn’t share it. In an interview on Fox News’ “Sunday Morning Futures,” the ex-Big Apple mayor, who was recently tapped to lead Trump’s post-election […]

FBI in possession of laptop containing Hunter Biden’s emails, and agree with Director of National Intelligence Ratcliffe’s assessment that emails were not part of Russian disinformation campaign. This is a developing story. Check foxnews.com for updates.