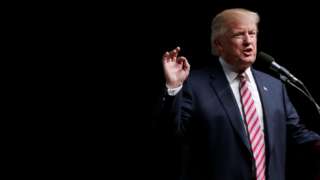 UN High Commissioner for Human Rights Zeid Raad al-Hussein cited Mr Trump’s comments on the use of torture and his attitude to “vulnerable communities”.

The Republican presidential candidate’s campaign has been marked by a number of controversial comments.

Overnight President Barack Obama, at a rally for Democratic candidate Hillary Clinton, condemned those comments, saying: “The guy says stuff that nobody would find tolerable if they were applying for a job at 7-Eleven.”