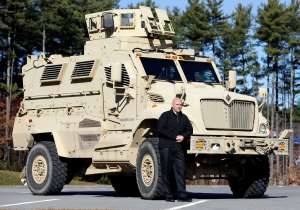 WASHINGTON (AP) — The Trump administration is preparing to restore the flow of surplus military equipment to local law enforcement agencies under a program that had been sharply curtailed amid an outcry over police use of armored vehicles and other war-fighting gear to confront protesters.

Trump’s order would fully restore the program under which “assets that would otherwise be scrapped can be repurposed to help state, local, and tribal law enforcement better protect public safety and reduce crime,” according to the documents.

Attorney General Jeff Sessions could outline the changes during a Monday speech to the national conference of the Fraternal Order of Police in Nashville, Tennessee, a person familiar with the matter said. The person insisted on anonymity to discuss the plan ahead of an official announcement.

The changes would be another way in which Trump and Sessions are enacting a law-and-order agenda that views federal support of local police as a way to drive down violent crime.

National police organizations have long been pushing Trump to hold his promise to once again make the equipment available to local and state police departments, many of which see it as needed to ensure officers aren’t put in danger when responding to active shooter calls and terrorist attacks. An armored vehicle played a key role in the police response to the December 2015 mass shooting in San Bernardino, California.