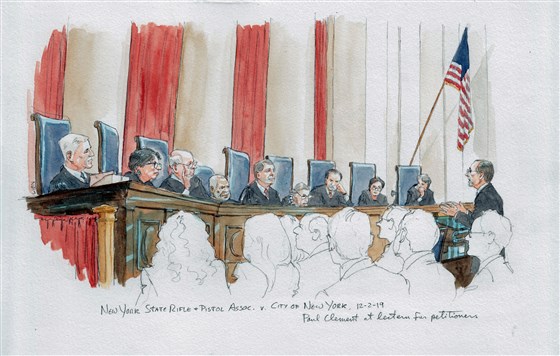 The Supreme Court seemed wary of a New York law that strictly limits the carrying of guns outside the home during arguments Wednesday in the first major Second Amendment clash in more than a decade.

The conservative majority court posed sharp questions about the constitutionality of the New York regulation, which gives government officials broad discretion over the issuing of licenses to carry a concealed firearm.

“Why isn’t it good enough to say I live in a violent area and I want to be able to defend myself?” Justice Brett Kavanaugh asked New York’s solicitor general. “With any constitutional right, if it’s up to the discretion of an individual officer, that seems inconsistent with an objective constitutional right.”

At issue in the case is New York’s so-called “proper cause” law, which generally requires applicants to demonstrate a special need, beyond a basic desire for self-defense, to qualify for an unrestricted concealed carry license. New York is among eight states and the District of Columbia that give wide discretion to licensing officials.