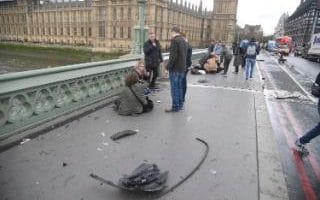 Four people have been killed in the Westminster terror attack that brought carnage to the heart of London, including the armed police officer who was stabbed and his assailant.

Mark Rowley, Scotland Yard’s top anti-terror officer, confirmed that 20 people were injured after the attacker – armed with two large knives – mowed down pedestrians with his car on Westminster Bridge then rushed at the gates in front of the Houses of Parliament, stabbing a plain-clothes policeman before he was shot by armed officers on Wednesday afternoon.

The two other fatalities are understood to be people who were hit by the car on Westminster Bridge. Mr Rowley, the Met’s most senior counter-terror officer, said 20 other people were injured and that it was believed there was only one attacker.

Witnesses described scenes of terror when gunfire rang out as the attacker approached a second officer within yards of the Houses of Parliament.

The suspected attacker was pictured being treated by paramedics on a stretcher, as two knives used in the assault lay on the ground nearby.

Paramedics fought to save his life and that of his police victim on the floor of the cobbled courtyard in front of Parliament, with Foreign Office minister Tobias Ellwood among those who rushed to help.

The police officer was wheeled away on a stretcher with his face covered and it was later confirmed he had died.