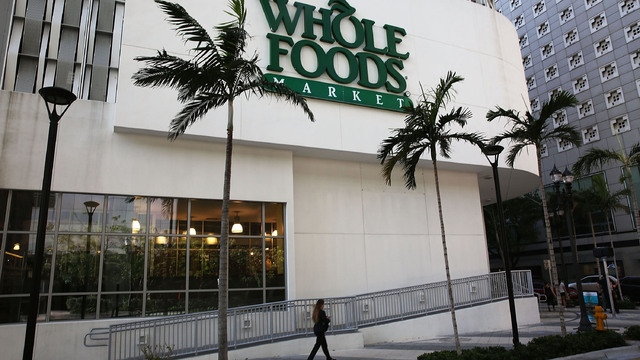 Amazon.com Inc. will acquire Whole Foods Market Inc. for $13.7 billion, a bombshell of a deal that catapults the e-commerce giant into hundreds of physical stores and fulfills a long-held goal of selling more groceries.

Amazon agreed to pay $42 a share in cash for the organic-food chain, including debt, a roughly 27 percent premium to the stock price at Thursday’s close. John Mackey, Whole Foods’ outspoken co-founder, will continue to run the business — a victory after a fight with activist investor Jana Partners that threatened to drive him from power.

The deal sends shockwaves across both the online and brick-and-mortar industries. Grocery chains plunged on Friday — Wal-Mart Stores Inc. fell as much as 7.1 percent, while Kroger Co. tumbled 17 percent — as investors worried that woes will mount in the increasingly cutthroat industry. Amazon and Whole Foods weren’t always seen as obvious partners, but Mackey has been under pressure to find an acquirer after Jana disclosed a more than 8 percent stake and began pushing for a buyout. That prodding irked Mackey, who has referred to Whole Foods as his “baby” and to Jana as “greedy bastards.”

By enlisting Amazon, he gets to keep his job as chief executive officer of the grocery chain while giving the stock price a jolt. It jumped 27 percent to $41.98 as of 11 a.m. in New York, bringing it close to the transaction price. Amazon shares gained 2.9 percent to $992.11.

Amazon gets a network of stores where it can implement decades’ worth of experiments in how people pick, pay for and get groceries delivered. The Whole Foods deal is an acknowledgment that it can’t build its own physical footprint quickly enough alone. CEO Jeff Bezos will try to recast Whole Foods’ ailing business, likely starting with upgraded technology, in much the same he has upended book selling, retailing, newspapers and other industries.