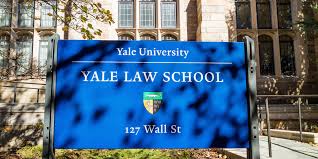 A bipartisan panel on civil liberties at Yale Law School was disrupted last week when more than 100 law students tried to drown out and intimidate the speakers, who eventually needed police to escort them out of the building, according to reports.

The school’s Federalist Society hosted the March 10 panel, which featured Monica Miller, of the progressive American Humanist Association, and Kristen Waggoner, of the conservative Alliance Defending Freedom (ADF). About 120 student protesters showed up with signs attacking the ADF to shout down the speakers, with one reportedly recorded on audio telling a member of the conservative group that she would “literally fight you, b—-.”

“It was disturbing to witness law students whipped into a mindless frenzy. I did not feel it was safe to get out of the room without security,” Waggoner told the Washington Free Beacon.