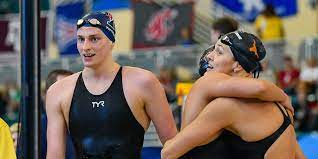 Thomas, a transwoman, who now swims for the University of Pennsylvania women’s team, spent three seasons on the men’s team before starting hormone treatment. Although Thomas passed all of the NCAA’s rules for trans competitors, including 12 months of testosterone suppression, many are speaking out against Thomas’ victory claiming it’s unfair for the biological women she competes against.

Thomas placed first in the 500-yard freestyle competition with a time of 4:33.24. Her victory has sparked backlash on social media.