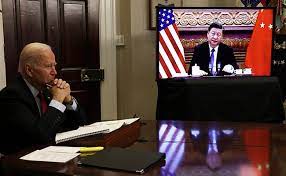 The highly anticipated call was the first conversation between the two men since Russia’s invasion last month.

“President Biden detailed our efforts to prevent and then respond to the invasion, including by imposing costs on Russia,” the White House said in a statement. “He described the implications and consequences if China provides material support to Russia as it conducts brutal attacks against Ukrainian cities and civilians.”