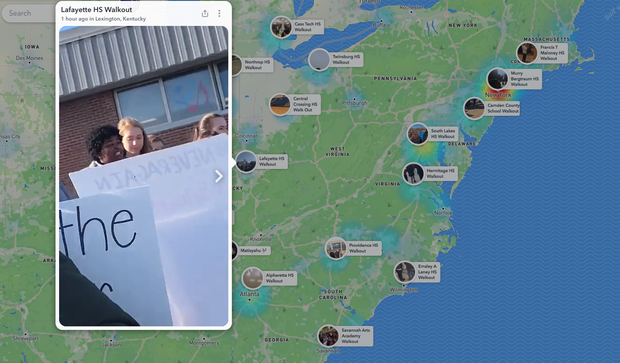 Students at thousands of schools across the country walked out of class Wednesday morning to protest gun violence. The 17-minute walkout is a tribute to the 17 victims who were fatally shot at Marjory Stoneman Douglas High School in Parkland, Florida, last month.

According to the Say #Enough website, which compiles the stories of shooting victims and advocates for change, there will be more than 3,000 walkouts held in communities coast to coast and in Puerto Rico. Students participating in the movement left or were leaving their classes at 10 a.m. in their respective time zone.

Students from 28 schools in Washington D.C., Maryland and Virginia marched to Capitol Hill, extending their protest, while inside lawmakers grilled officials from the ATF and FBI on how they proposed to tackle safety in schools in the wake of the school massacre. They gathered where just the day before, 7,000 pairs of children’s shoes were placed outside Capitol Hill to represent the children killed by guns since Sandy Hook.

As a crowd of lawmakers gathered to joing them, the first student speaker, Matt Post, started his speech by urging students to refuse compromise measures. “We will not sit in classrooms with armed teachers,” Post said. “We will not learn in fear.”