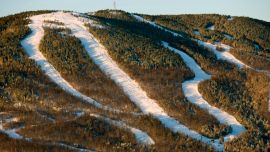 DENVER –  Prosecutors charged a Colorado woman with her father’s murder this week after police investigating his disappearance found the 69-year-old’s body encased in concrete in the crawl space under his home.

Dayna Jennings was arrested Jan. 10 after police searched her father’s suburban Denver home and found the remains, about a month after family and friends stopped hearing from William Mussack.

Police interviewed Jennings on Jan. 10 as other investigators searched the house and she admitted pouring concrete in the crawlspace, according to an arrest warrant affidavit made public on Wednesday after Jennings was charged Tuesday.

When police then told Jennings that investigators were breaking up the concrete, “she stated that she wished to speak with a lawyer,” the affidavit said.

Jennings, who is 44, also is charged with tampering with a deceased human body. She is jailed without bond and it was not clear whether she has an attorney.

Police in the city of Federal Heights near Denver began investigating Mussack’s disappearance in late December when his brother asked officers to check on his brother after not speaking for several weeks.

Officers first visited Mussack’s home on Dec. 28 and Jennings told them her father did not live there. Mussack’s brother, Robert, remained concerned and police went back and got permission from Jennings to look around the house. Police reported in the affidavit that the house smelled “like sewage and something rotting.”