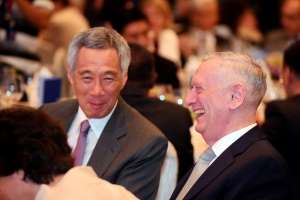 SINGAPORE (AP) — U.S. Defense Secretary Jim Mattis turned up the heat on North Korea and its main benefactor, China, on Saturday, calling the North Koreans a “clear and present danger” and chastising the Chinese for coercive behavior in the South China Sea.

His sharp words for both countries suggest he believes China will, out of self-interest, exert leverage on North Korea to halt its nuclear and missile programs even as Washington pushes Beijing to change course in the South China Sea.

Speaking at an international security conference in Singapore, Mattis said the Trump administration is encouraged by China’s renewed commitment to working with the U.S. and others to rid North Korea of its nuclear weapons. He also said he thinks China ultimately will see it as a liability rather than an asset.

China blocked tough new sanctions against North Korea that the United States pushed in the U.N. Security Council on Friday. However, the Security Council did vote unanimously to add 15 individuals and four entities linked to the North’s nuclear and missile programs to a U.N. sanctions blacklist.

In his speech to the Shangri-La Dialogue, sponsored by the International Institute for Strategic Studies, Mattis sought to balance his hopeful comments on China with sharp criticism of what he called Beijing’s disregard for international law by its “indisputable militarization” of artificial islands in disputed areas of the South China Sea.