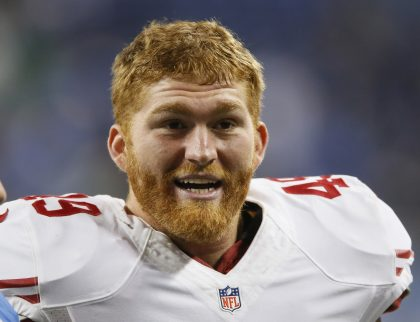 Former San Francisco 49ers fullback Bruce Miller, who was cut on Tuesday after his arrest for an alleged assault against two men, one of whom was 70 years old, reportedly got into a fight with some restaurant patrons.

The meat of conflict? Sandwiches.

Miller was asked to leave a historic restaurant, Tommy’s Joynt, a manager told the San Francisco Chronicle. Restaurant manager Eddie Martin said Miller took a seat near the front of the restaurant, stared at the buffet for about 20 minutes, then approached guests and started arguing over a sandwich.

There were no injuries, and Miller was escorted out. His alleged assault occurred hours later.

“I believe he wanted their sandwiches,” said Martin, who surmised that Miller got all hot and bothered by the restaurant’s renowned brisket sandwich. “The guests were great. They were very calm and amused by the situation.”