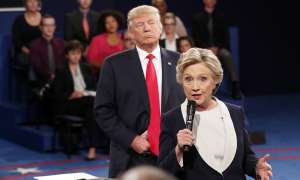 Clinton was speaking in her first televised interview since her stunning defeat in the election in November, two days ahead of the publication of What Happened, her book about her defeat.

Sitting onstage as Trump was sworn in on 20 January was “an out-of-body experience”, Clinton said, recalling that she attended in the hope of presenting a unified front following an ugly and bitter campaign.

“I’m a former first lady, and former presidents and first ladies show up,” she told CBS This Morning. “It’s part of the demonstration of the continuity of our government. And so there I was, on the platform, you know, feeling like an out-of-body experience. And then his speech, which was a cry from the white nationalist gut…”

Trump’s dark-hued oration famously focused on a vision of “American carnage”, a supposed crime-riddled post-industrial dystopia the new president said only he could fix.

Clinton continued: “What an opportunity [Trump had] to say, ‘OK, I’m proud of my supporters, but I’m the president of all Americans.’ That’s not what we heard at all.”