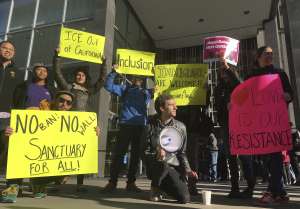 WASHINGTON/SAN FRANCISCO March 6 (Reuters) – The U.S. Justice Department sued the state of California over so-called “sanctuary” policies that try to protect illegal immigrants against deportation, ramping up a confrontation over whether local police should enforce federal law.

The issue of illegal immigrants has become increasingly heated since Donald Trump became president last year and signaled that he planned to target a wider swath of people for deportation.

Trump’s attorney general, Jeff Sessions, has made combating illegal immigration one of his top priorities since taking over the helm of the Justice Department in February 2017. A key part of that effort involves a crackdown on primarily Democrat-governed cities and states that Sessions claims are “sanctuaries” that protect illegal immigrants from deportation.