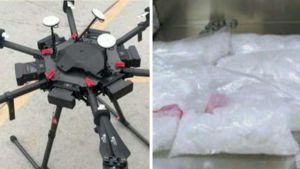 Mexican police reportedly pulled over four men driving a stolen pick-up truck and discovered a drone carrying an explosive device in the vehicle, leading some analysts to fear drug cartels may have figured out how to arm the devices to attack opponents — including those inside the United States.

Federal police discovered the drone attached to the IED last week during a traffic stop in Guanajunto, where several cartels are known to operate, including the Sinaloa Cartel, Small Wars Journal reported.

Besides the drone, police found phones, an AK-47 and ammunition. An improvised explosive device was taped to the drone, 3Dr Solo Quadcopter, that could reportedly be detonated with a remote control. It was not clear if the four men were a part of any criminal group. The drone had a range of about half a mile, but modifications would have allowed it to fly farther.

Earlier this year, top security chiefs cautioned Congress that cartels and terrorist groups could use drones to strike targets within the U.S., The Washington Times reported.

Cartels have been known to use “potato bombs,” a round-shaped device with shrapnel and explosive device inside but this was the first known use of a drone carrying a bomb, Small Wars Journal reported.

U.S. officials were aware cartels used drones to carry drugs into the U.S., but the use of an explosive device would be a significant development.