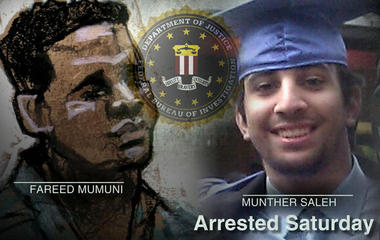 NEW YORK — A New York City man who pleaded guilty Friday to terror charges was in contact with a recruiter for the Islamic State of Iraq and Syria, or ISIS, who was killed in a U.S. drone strike in Syria in 2015, according to a federal prosecutor.

As part of his guilty plea in federal court in Brooklyn, Munther Omar Saleh admitted that he had sought to communicate with and support the group, “knowing that it was involved in terrorism.”

Assistant U.S. Attorney Alex Solomon told the judge that there was evidence that before his arrest in June 2015, the 21-year-old Queens resident was taking instructions from Junaid Hussain, a convicted British hacker who fled to Syria and became one of ISIS’ top online recruiters before his killing.

Solomon described Hussain as an “attack facilitator,” saying he encouraged Saleh and a co-defendant to use a pressure-cooker bomb for homegrown strike plot modeled after the Boston Marathon bombings.

At the time of his arrest in 2015, Saleh’s case was among several in the city and elsewhere involving young men and women allegedly radicalized by ISIS propaganda. Most have been accused either of trying to travel abroad to fight with the group or of talking about attacks on U.S. soil on the group’s behalf, but not getting far enough to put civilians at risk.

Court papers said Saleh had described himself as a “full-fledged” member of ISIS. Electronic surveillance revealed that he had researched how to build a pressure-cooker bomb and looked up New York City landmarks and tourist attractions on the internet, the papers said.