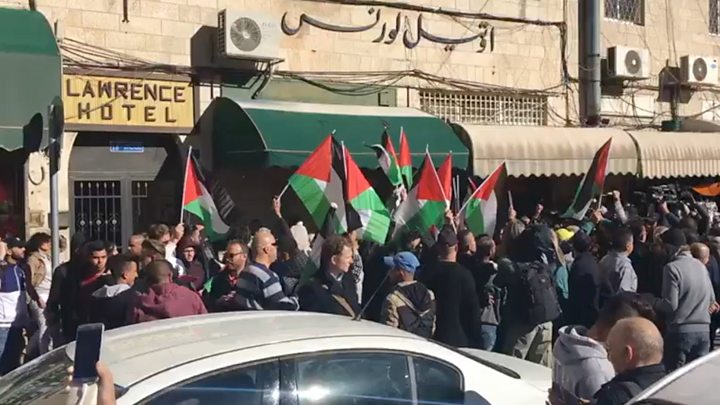 Palestinians have taken to the streets of the West Bank and the Gaza Strip for a third day angry at US President Donald Trump’s recognition of Jerusalem as Israel’s capital.

Hundreds protested, but numbers were down compared to Friday.

Earlier, Israel carried out strikes on Gaza in response to rocket fire aimed at southern Israel.

The move ends US neutrality on one of the region’s most sensitive issues and has been criticised even by US allies.

Israel has always regarded Jerusalem as its capital, while the Palestinians claim East Jerusalem – occupied by Israel in the 1967 war – as the capital of a future Palestinian state.

For Mr Trump the decision fulfils a campaign promise and he has said it was “nothing more or less than a recognition of reality”.

More than 600 Palestinians held protests at over 20 West Bank sites, according to the Israeli army, with some lobbing stones and petrol bombs at security forces.