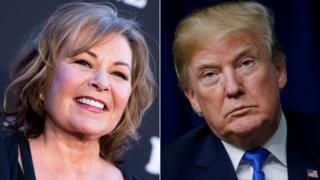 The ratings success of Roseanne Barr’s return to her self-titled TV sitcom prompted President Donald Trump to give her a congratulatory phone call.

Mr Trump confirmed at a speech in Ohio that the call had taken place.

The return of Barr’s 1990s sitcom after 20 years away drew an audience of more than 18 million viewers on Tuesday.

It also saw the return of John Goodman as Roseanne’s husband Dan alongside such other series regulars as Laurie Metcalf and Sara Gilbert.