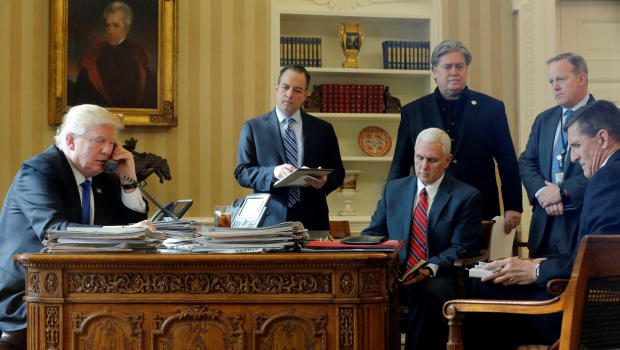 The Trump administration appeared to loosen U.S. sanctions Thursday that the Obama administration had imposed against Russia in response to its cyberattacks in the 2016 presidential election.

The Treasury Department published a license that authorizes certain transactions between U.S. companies and the FSB, Russia’s security service and for the importation, distribution or use of “certain information technology products in the Russian Federation.” Such transactions had been prohibited under Obama administration sanctions imposed on Russia in late December. At the time, the U.S. sanctioned nine entities and individuals including the FSB and GRU. The Obama administration said that the FSB had assisted and provided material support to the GRU in its efforts to interfere with the U.S. election.

White House press secretary Sean Spicer was asked at his daily press briefing about why the U.S. is easing sanctions against Russia, but he said that the move is a “fairly common practice” in which the Treasury Department looks for “specific carve-outs” for certain industries after sanctions are put in place. He said it’s a “regular course of action that Treasury does quite often.”

A recent story from The Moscow Times said RBC newspaper warned that the sanctions could affect the importation of electronics to Russia. The report said it would affect devices with an encryption feature including cell phones and tablets.