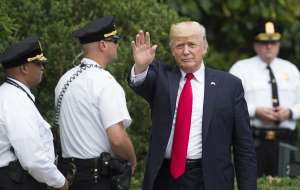 The U.S. Secret Service is facing money problems — but that’s not President Donald Trump’s fault, the agency’s director said Monday in response to a report that the First Family was straining protective resources.

Secret Service Director Randolph “Tex” Alles said funding for roughly 1,100 agents working overtime in 2017 is not an issue “that can be attributed to the current Administration’s protection requirements alone, but rather has been an ongoing issue for nearly a decade due to an overall increase in operational tempo.”

His comments came after a report in USAToday, in which Alles was interviewed, that the agency’s funding problems were partly caused by the president’s large family and their multiple, oft-visited Trump properties both in the U.S. and overseas.

Alles told USAToday the agency is handling an unprecedented number of White House officials who need protection. Under Trump, 42 people have protection, including 18 members of the Trump family. That’s up from 31 during the Obama administration.

“The president has a large family, and our responsibility is required in law,” Alles told the paper. “I can’t change that. I have no flexibility.”

The budget problem also dogged the agency in the heat of the 2016 campaign with its multi-candidate Republican and Democratic primaries.

“Our agency experienced a similar situation in calendar year 2016 that resulted in legislation that allowed Secret Service employees to exceed statutory caps on pay,” Alles said.

Congress has managed to deal with this problem in a bipartisan way in the past, and ranking member of the Senate Homeland Security Committee, Sen. Claire McCaskill, D-Mo., said Monday that she was “committed to working with my colleagues on both sides of the aisle to get this done.”