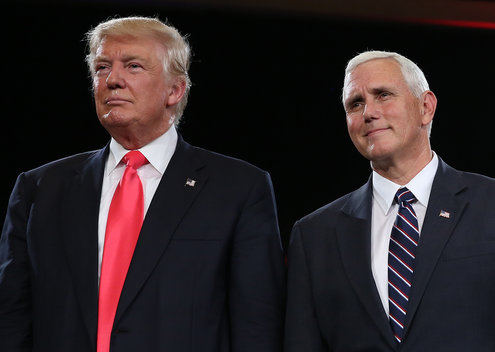 There has been intense jockeying among several of Mr. Trump’s highest-profile campaign advisers, suggesting a competition to lead the new administration’s foreign policy, national security and crime-fighting agencies. Mr. Trump is also considering naming Mr. Giuliani or Senator Jeff Sessions of Alabama as the next attorney general, according to the people familiar with the discussions.

But Mr. Giuliani said Monday night at a Wall Street Journal election forum that he would not be going to the Justice Department. And if Mr. Sessions, a relentless critic of illegal immigration, is nominated for attorney general, he can expect opponents to bring up the fact that he was once rejected for a federal judgeship after officials testified that he had made racist comments.

Mr. Giuliani seems more eager to be secretary of state, though John R. Bolton, a fierce foreign policy hawk who served as ambassador to the United Nations and under secretary of state under President George W. Bush, is also under consideration, the people familiar with the discussions said. Richard Grenell, who was Mr. Bolton’s spokesman at the United Nations, is being considered as ambassador there.

In 1986, before Mr. Sessions became a senator himself, a Republican-controlled Senate rejected his nomination by President Ronald Reagan to a federal judgeship. Several United States attorneys testified that he had made racist comments, including calling an African-American lawyer “boy,” and that he had been hostile to civil rights cases. Mr. Sessions denied making most of the remarks, but apologized for once saying that he had thought the Ku Klux Klan was O.K. until he heard that some members smoked pot; he called it a joke.