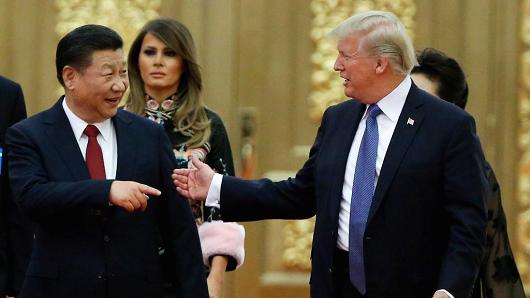 U.S. President Donald Trump praised Chinese President Xi Jinping Saturday after the ruling Communist party announced it was eliminating the two-term limit for the presidency, paving the way for Xi to serve indefinitely, according to audio aired by CNN.

“He’s now president for life, president for life. And he’s great,” Trump said, according to audio of excerpts of Trump’s remarks at a closed-door fundraiser in Florida aired by CNN. “And look, he was able to do that. I think it’s great. Maybe we’ll have to give that a shot someday,” Trump said to cheers and applause from supporters.

It is not clear if Trump, 71, was making the comment about extending presidential service in jest. The White House did not respond to a request for comment late Saturday.

U.S. Representative Ro Khanna, a Democrat, said on Twitter that “whether this was a joke or not, talking about being President for life like Xi Jinping is the most unAmerican sentiment expressed by an American President. George Washington would roll over in his grave.”

U.S. presidents by tradition served a maximum of two four-year terms until President Franklin Roosevelt was elected a record four times starting in 1932. An amendment to the U.S. Constitution approved in 1951 limits presidents to two terms in office.