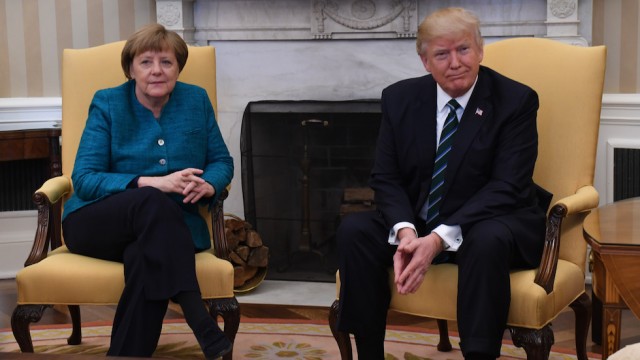 President Trump on Saturday morning pressed Germany to to pay more money to NATO, one day after meeting with German Chancellor Angela Merkel in Washington.

“Despite what you have heard from the FAKE NEWS, I had a GREAT meeting with German Chancellor Angela Merkel. Nevertheless, Germany owes … vast sums of money to NATO & the United States must be paid more for the powerful, and very expensive, defense it provides to Germany!” Trump wrote in a series of tweets.

“I reiterated to Chancellor Merkel my strong support for NATO as well as the need for our NATO allies to pay their fair share for the cost of defense,” Trump said.

“Many nations owe vast sums of money from past years, and it is very unfair to the United States. These nations must pay what they owe.”

As a presidential candidate, Trump often called for the U.S. to reevaluate its relationship with NATO and lamented that the U.S. is getting an unfair deal from the treaty organization.

The U.S. leads NATO and the world in military spending, and is one of only five countries in the 28-member alliance that meet or exceed the group’s 2 percent spending target. Germany falls 15th on the list, according to NATO defense expenditure data.