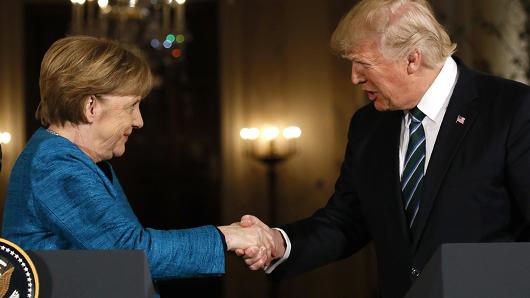 President Donald Trumpreportedly handed German Chancellor Angela Merkel a bill for around £300 billion ($374 billion) for the money her country “owed” Nato for defending it, a report said on Sunday, a claim that was flatly rejected by the White House.

The Times, a U.K.-based publication, cited unnamed sources that claimed Trump handed Merkel a bill for the U.S.’s services to the alliance when the two met recently in Washington. Trump has chided several countries in the alliance, including Germany, for not spending enough on defense, forcing the U.S. to shoulder most of the financial and logistic burden.

However, Michael Short, a White House spokesperson told CNBC that the report was “false.”

‘According to The Times, a German minister described the action taken by Trump as “outrageous” and said that Merkel “will not respond to such provocations”.

“The president has a very unorthodox view on Nato defense spending,” another source told the publication. “The alliance is not a club with a membership fee. The commitments relate to countries’ investment in their defense budgets.”

Trump has minced no words about the trans-Atlantic alliance, and has not been shy in reprimanding Europe’s largest economy about fulfilling its obligations to NATO. A day after meeting with the German chancellor, the president claimed via Twitter that Germany owed “vast sums of money” to the alliance.

In a January interview, Trump told Germany’s Bild newspaper that the alliance was “obsolete.” The remark stoked concern in European capitals that the new American president would abandon the fulcrum of the West’s post-war defense posture.