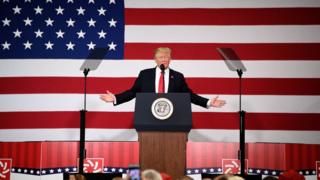 US President Donald Trump said “it’s time” for US lawmakers to act on tax reform, increasing pressure on Congress as he seeks to make good on one of his biggest campaign promises.

His administration is pushing for a simpler tax code and lower rates, but it has said it will leave the details of the proposal to Congress.

Lawmakers are expected to present a bill in coming months.

There is broad agreement that the US tax code – which runs to thousands of pages – needs to be simplified.

Powerful business organisations in the US, including the Chamber of Commerce and Business Roundtable, are supporting the effort.

Republicans hope to achieve tax reform by the end of the year.

But reaching agreement on the details will be tough, analysts say. The last time the US tax code was overhauled was in 1986.